Blood sugar level refers to the concentration of sugar (glucose) in the blood. Normal blood sugar values, in the morning and on an empty stomach, range between 4.0 mmol / L and 5.6 mmol / L. 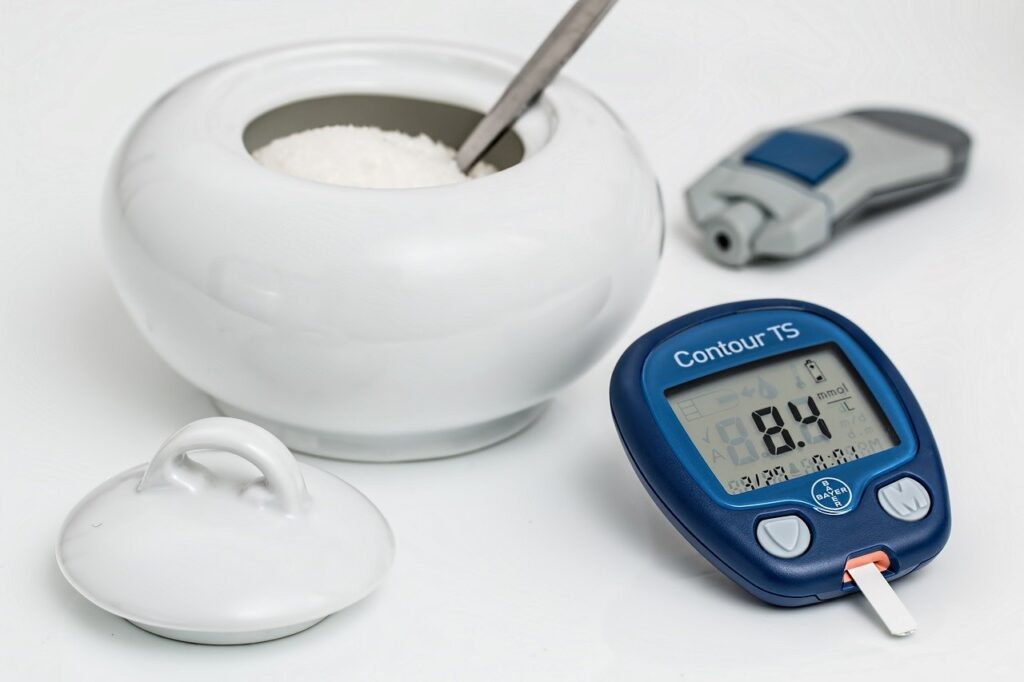 Without proper treatment and appropriate dietary regime, elevated blood sugar levels can lead to various health complications, so a biochemical blood test is advised if there are symptoms such as:

What is glucose and why is it important?

Glucose is the most abundant monosaccharide in nature. Its decomposition releases a large amount of energy that is necessary for the development of basic life functions. For this reason, glucose is the most important source of energy in all organisms.

In order for glucose to move freely through the bloodstream and be taken up by muscle tissue and other tissues, glucose is supported by insulin – one of the main hormones responsible for anabolic processes in our body.

Hypoglycemia is a condition in which the level of glucose in the blood is lower than normal. In the initial stages, hypoglycemia can be manifested through symptoms such as excessive sweating, dizziness, fatigue, shivering, and/or palpitations.

Without treatment, these symptoms can worsen and lead to blurred vision, decreased concentration, slowed speech or loss of consciousness.

In people with diabetes, hypoglycemia is caused by several factors:

In contrast to hypoglycemia, hyperglycemia means high blood sugar. In patients with diabetes, hyperglycemia occurs due to insufficient insulin dose or excessive consumption of carbohydrates. Its occurrence can be influenced by:

What are the normal blood sugar levels?

Blood sugar levels vary throughout the day, both in healthy people and people with diabetes.

In a completely healthy person, the blood sugar level is less than 5.6 mmol / L 8 hours after the last meal. Two hours after a meal, this level should be less than 7.8 mmol / L.

Diabetes is diagnosed by analysis of blood and glycosylated hemoglobin (HbA1c).

Blood analysis is performed after advising the patient not to consume food and drink (except water) 8 hours before sampling. Blood sugar levels less than 5.6 mmol / L are considered normal. A score indicating values ​​between 5.6 mmol / L to 6.9 mmol / L is considered prediabetes, and if the sugar level on two separate tests is 7.0 mmol / L or higher, the patient is referred for an OGTT test.

Abstinence from food and drink is not required for the analysis of glycosylated hemoglobin. The results of this test indicate an average blood sugar level during the last two to three months. It measures the percentage of blood sugar that is bound to hemoglobin. The higher the blood sugar level, the higher the hemoglobin level associated with it. Two findings with a score of 6.5% or more indicate the presence of diabetes. A score between 5.7 and 6.4% indicates prediabetes, while a finding lower than 5.7% is considered normal.

If the results of this test are not consistent and give different values ​​at each test (which may be the case in pregnancy), further analyzes are performed.

Random blood test – sampling is performed in a random period, regardless of the time of the last meal. A blood sugar level that exceeds 11.1 mmol / L indicates diabetes.

Oral glucose tolerance test (OGTT) – for the purposes of this test, it is necessary to perform a regular blood glucose test, which is performed after eight hours of abstinence from food. Then, the patient drinks a dose of glucose solution, after which the blood sugar level is measured randomly for the next two hours. Blood sugar level less than 7.8mmol / L is normal. More than 11.1mmol / L after two hours, indicates diabetes. A score between 7.8mmol / L and 11.1mmol / L indicates prediabetes.

In Aqualab laboratories, you can perform all the necessary tests to determine the blood sugar level.